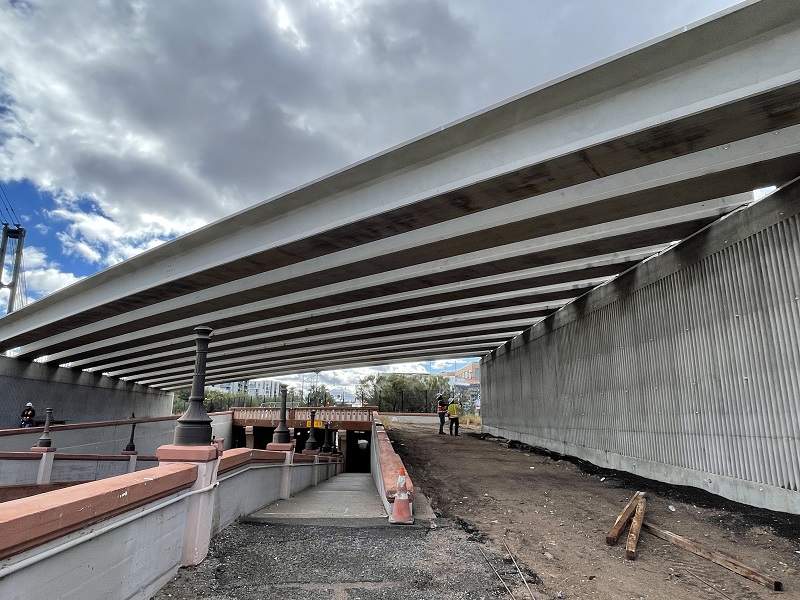 David Burbank is the project manager at the City of Tucson Department of Transportation and Mobility, and he provided the following Downtown Links project update.

Overall, the project is about 50% complete. The majority of the work so far has been underground, moving utilities and installing large storm drain culverts beneath the future roadway, and creating the new alignment for the road. About 80% of the underground work is complete.

Crews have graded the roadway surface for the portion of the project north of Broadway, so it is now ready for paving. Curbs are in place and the prep work at the Broadway intersection is complete.

The project celebrated a milestone recently as massive girders were placed above Sixth Avenue for the new overpass. The larger overpass will carry two lanes of Downtown Links traffic in each direction over Sixth Avenue.

As shown in the image above, the new overpass is much taller than the existing Sixth Avenue overpass. That’s to ensure the overpass is above existing surface on both sides, and to accommodate current and future development in the area, Burbank said.

Just as during monsoons, recent rains have been a challenge for the construction crews. They are forced to stop work for the rain and then must wait for the project area to dry up afterward in order to continue much of the work on the project.

See a map of the project area and current street closures here.

In the next couple of months, the section from Broadway to approximately Sixth Street will be paved.

Then, crews will continue working on the Sixth Street and Barraza connection, including building the new Sixth Street underpass. That work entails building a temporary railroad line, called a shoefly, so crews can construct new drainage culverts and a new railroad underpass. This segment of the project is expected to take approximately a year to complete.