Skip to content
English Spanish
Home » Who We Are » RTA Funding

The Regional Transportation Authority’s 20-year regional transportation plan is funded by a voter-approved, half-cent transaction privilege (excise) tax. The tax is collected in the state-established RTA special taxing district within Pima County. The RTA plan and tax measures were approved by voters in Pima County on May 16, 2006, and are effective through June 30, 2026.

Collection of the RTA tax began on July 1, 2006, and is assessed in six major categories:

*Grocery and pharmaceutical items are tax-exempt.

The tax, which applies to visitors as well as residents, businesses and utilities in Pima County, is collected by the State of Arizona which, in turn, transfers the collected funds to the RTA’s regional transportation fund account. Regardless of where you live, you may contribute to the RTA tax. If you live in the county but do your shopping primarily in one of the local municipalities, your regional tax dollars are collected in the jurisdiction where you spend your money.

By state law and RTA policy, the RTA must spend the money collected as outlined in the voter-approved plan based on regional priorities.

Prior to RTA Board and 2006 voter approvals, the recommended draft RTA plan was endorsed by RTA member jurisdictions, which had submitted proposed projects for plan consideration.

Due to lower-than-anticipated tax revenues following the Great Recession, the Regional Council of Pima Association of Governments, which manages the RTA, and RTA Board committed additional federal and state dollars that are dedicated to the region to meet the RTA revenue commitments for the remaining five-year period of the 20-year RTA plan. (The University of Arizona Eller College of Management currently projects the RTA tax will generate revenues of $1.6 billion through June 2026.)

Prior to the 2006 election, the RTA Board pledged to the public a commitment to fund the minimum allocation for projects named in the RTA ballot.

RTA member jurisdictions are responsible for costs beyond the ballot amounts and long-term maintenance of RTA improvements. In addition, local jurisdictions currently manage the maintenance of local roads and neighborhood streets. RTA funding is voter-committed to regional level projects, such as major arterial corridors that link travelers to regional destinations and freeways.

An independent, 10-year performance audit of the RTA plan was completed in early 2017 and found that funds have been spent as outlined in the ballot. Under a robust framework established by the RTA Board, the RTA and partners through intergovernmental agreements are delivering the projects on budget and on schedule. The audit also indicated that if current practices continue, the RTA is expected to deliver projects identified in the plan within the timeframe outlined.

The performance audit of the RTA plan was compiled by Sjoberg Evashenk Consulting Inc. for the Arizona Office of the Auditor General. 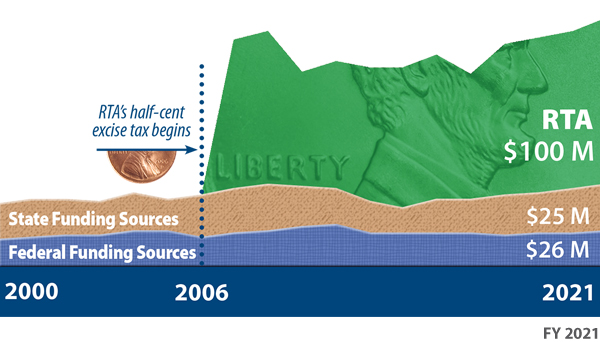 View the following transportation funding video to get a simple breakdown of the RTA’s funding imact on the region and its funding flexibility.

Funding for a new RTA plan will be determined by planning efforts currently underway by a citizens’ advisory committee with support from a technical management committee and with public input.

A new budget for projects identified in a future plan will need to be established based on anticipated new tax revenues for the yet-to-be-identified plan period. Once a draft plan is ready, the RTA will conduct extensive public outreach to seek broad input on the draft plan before final approval by the RTA Board. Both the plan and tax will require voter approval in a future election.