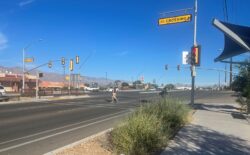 It’s Stop on Red Week to call attention to the risks of red light running. We all know that it takes vigilance and care to ensure the safety of everyone traveling around us, but it’s always a good time to refresh our presence of mind about transportation safety. The Regional … Read more »

The Regional Transportation Authority and Pima Association of Governments operate a website that shows real-time traffic information based on reporting from local law enforcement agencies and transportation departments, including flood conditions. During Monsoon, the Transview.org site includes road closures due to flooding (red circles) and areas where drivers should proceed … Read more » 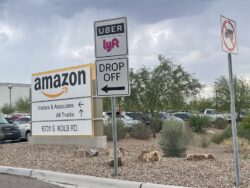 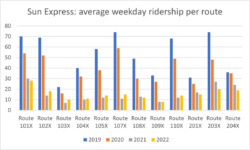 Express bus ridership has not yet recovered to its pre-pandemic numbers, despite high fuel prices and more companies returning from full-time remote work to hybrid in-office schedules. In 2019, five of the region’s Sun Express routes had an average of approximately 70 riders per weekday. That number dropped in 2020 … Read more »

Ever wonder about the status of the 35 roadway corridor projects in the Regional Transportation Authority plan? The RTA provides information about projects in various formats and locations on our website. Here’s a guide to what you can find: There are resources to track our activity on all the roadway … Read more » 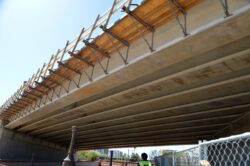 It seems every month since March 2020, we’ve heard about supply-chain disruptions and seen them firsthand in our grocery stores and online availability of goods. Now, some Regional Transportation Authority projects are facing similar supply and demand challenges. A number of products used to construct roadways and the elements around … Read more » 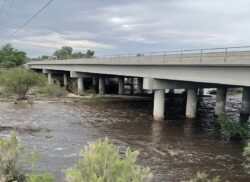 Southern Arizonans rejoice over monsoon rains, until we approach a flooded roadway or intersection on our way home from the store or work and wonder if we have enough clearance to cross. We all know we must avoid dip crossings and not enter an obviously flooded roadway, but we’ve also … Read more » 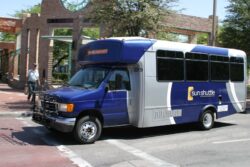 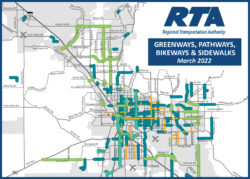 The Regional Transportation Authority has developed maps to show where RTA plan projects have been completed throughout the Tucson metropolitan area. That goes for the large, named corridor projects, and for new sidewalks, bus pullouts, intersection improvements and more. The RTA plan and half-cent (excise) sales tax to fund improvements … Read more »