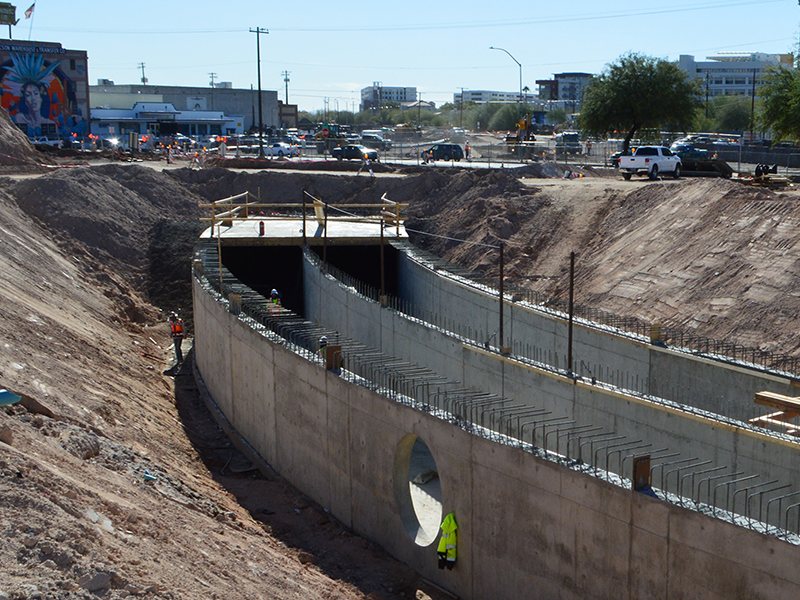 The 10-by-12-foot concrete box culverts installed underneath the new Downtown Links roadway surface will carry water to the Santa Cruz River and remove many downtown neighborhood properties from the floodplain.

Downtown Links is one of 35 roadway corridor projects funded in the Regional Transportation Authority’s 20-year regional transportation plan approved by voters in 2006.

Managed by the City of Tucson, the project includes extending Barraza-Aviation Parkway to connect with Interstate 10. The city’s project manager, David Burbank, is working with Steve Pageau, a senior engineer and construction administration consultant with Consultant Engineering, Inc.

What work has been completed so far?

To this point, the project has focused on much of the preparation required before recognizable road construction can begin. The crews have recently placed 10-by-12-foot box culverts  underground (pictured above) that will collect and move water through the Arroyo Chico drainageway project to the Santa Cruz River.

Crews also installed sewage bypasses to enable the construction work. This was required in order to install new sewer lines, then put them in service.

“With a bypass, we keep live sewer lines working while we construct new system,” said Burbank, the project manager for the Tucson Department of Transportation and Mobility.

“Box culverts increase the capacity to carry stormwater underneath the buildings and roadways and carry it out to the channel, actually out to the Santa Cruz eventually,” Burbank said. “That’s a big improvement, and the added capacity brings the folks that are in the floodplain out of the floodplain. It’s about a 20% increase in capacity.”

With the increased drainage capacity, downtown neighborhood residents whose property will be removed from the floodplain will no longer be required to purchase flood insurance.

Flood control measures are planned for the Stone Avenue railroad underpass. This steeply graded spot can fill with water during large, fast-moving storms such as a monsoon. Here, the new storm drain pipes will replace an existing pump system at the underpass. The new pipes will use gravity and will be part of a larger pipe culvert system that will carry water straight to the Santa Cruz River.

“No more flooding of the Stone Avenue underpass as the new system will be capable of handling the monsoon events that Tucson experiences,” Burbank said. “We’re going to build it up to where it can handle the flow.”