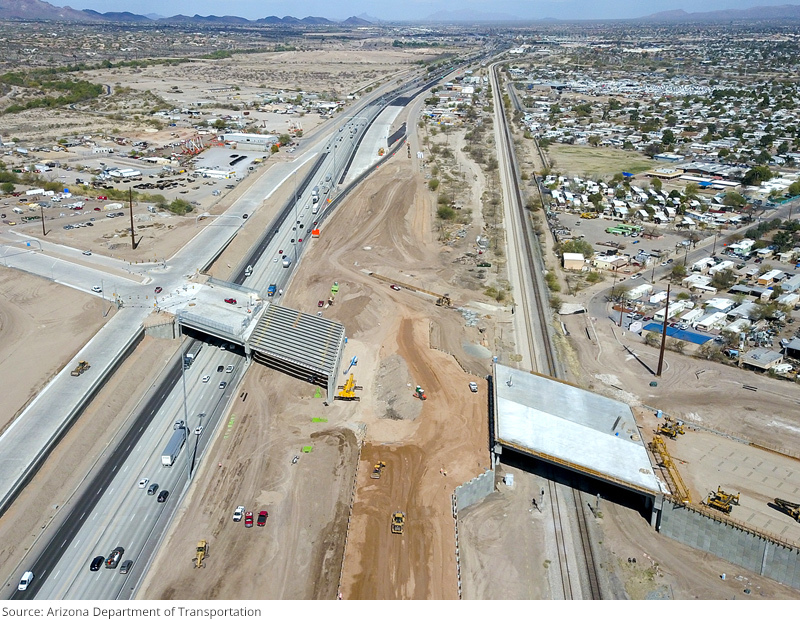 Separating vehicle traffic from the railroad crossing at Interstate 10 and Ruthrauff Road is part of the improvements in one of the 35 roadway corridor projects in the Regional Transportation Authority’s 20-year plan approved by voters in 2006.

What work has been completed so far?

The project is nearly 75 percent complete.

Drivers who frequent the area know that Ruthrauff is closed at I-10 for this work to raise and lower the roadways, and the closures are expected to continue for a few more months. The bridge decks that will carry Ruthrauff traffic over I-10 and the railroad have been poured and many of the retaining walls have been constructed.

ADOT expects many sections of the roadwork will start to open between now and the end of summer, including: Ruthrauff Road/El Camino del Cerro being reconnected over I-10 and the Union Pacific Railroad, though the on- and off-ramps will not open at that time.

Westbound I-10 will shift to the new pavement and all local streets east of the railroad are expected to open. It is possible that sections of the frontage roads may reopen in this timeframe.

In the next few months, Sundt Construction Inc. crews will finish the pavement for the new westbound I-10 lanes, construct bridge railings and ramps, continue paving at various locations around the project, and complete drainage work.

The full interchange will likely open this fall after completion of connections for frontage roads and ramps.