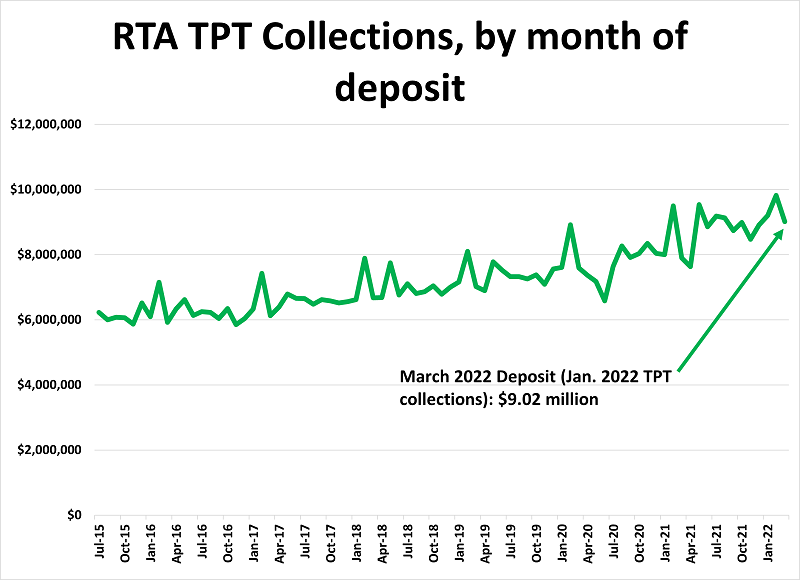 The Regional Transportation Authority is on track to meet or exceed the revenue budget for its tax collections this year to fund projects in the RTA’s 20-year regional transportation plan, which is effective through June 2026.

The University of Arizona Eller College of Management produces estimates for how much the 2006 voter-approved half-cent Transaction Privilege Tax, also called TPT or sales tax, will bring in annually, based on economic projections, to help the RTA Board set its budget for RTA projects each year. The RTA tax is collected within Pima County, which mirrors the RTA taxing district.

The RTA sales tax has generated more than $8.4 million every month of the fiscal year that began in July, with most months exceeding $9 million. This is, so far, significantly above projections to date, in part because pandemic revenue collections have been stronger than anticipated, said RTA Deputy Director Jim DeGrood.

It remains to be seen what current inflation rates will mean for revenue collections throughout the rest of the fiscal year and beyond, he cautioned.

The March deposit from the Arizona Department of Revenue was $9 million, which reflects revenue collected in Pima County in January.

That is a “substantial increase over prior years,” DeGrood said. It represents a 14% increase from the same time in 2021. Looking ahead at next fiscal year, July 2022 through June 2023, DeGrood shared with the RTA Board that the Eller forecast predicted flat growth in revenues, as the effect of pandemic stimulus payments wane. The RTA Board will consider approving a $107 million budget for next fiscal year at its May 2022 meeting.