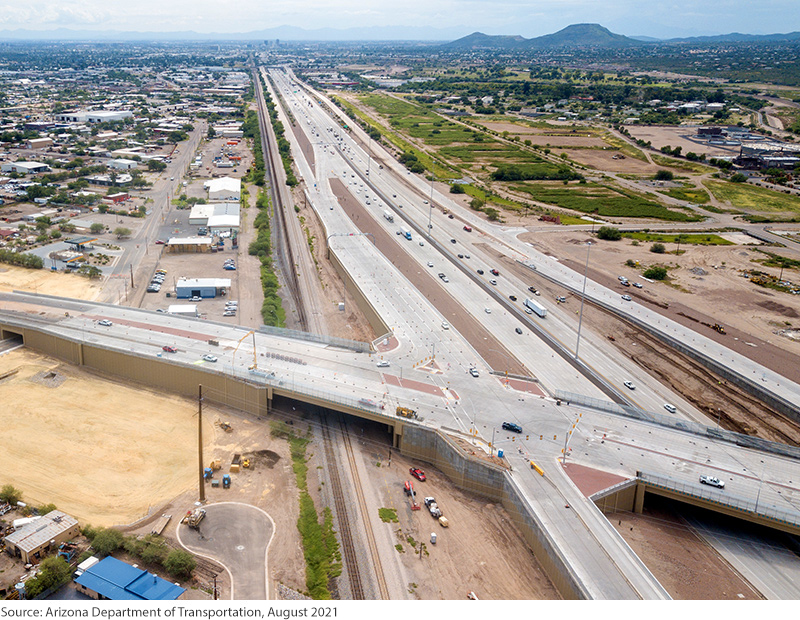 The Arizona Department of Transportation has completed the reconstruction of the Ruthrauff Road and El Camino del Cerro intersection with Interstate 10, including widening of interstate lanes and adding a new railroad underpass to separate vehicles and trains.

“All the ramps are open, all the traffic control is gone,” said Rod Lane, the district engineer for the Arizona Department of Transportation.

The project reached what’s called substantial completion 30 days ahead of schedule, he said. That means there are some ongoing finishing touches. “You’ll still see some contractors out there doing minor punchwork,” Lane told the Regional Transportation Authority (RTA) Board on Oct. 29.

The major elements of the project included adding traffic lanes to reduce delays on I-10, adding lanes to the interchange for Ruthrauff/El Camino del Cerro traffic, and constructing the railroad underpass so traffic no longer must wait for dozens of trains per day. Each of those elements also provides increased safety for vehicles and trains.

Art along the walls of the project includes a map of major city streets; a portrait of C. John “Mos” Ruthrauff, who was a city engineer and surveyor; a survey instrument; the outline of the Camino del Cerro hills.

The project is one of 35 RTA roadway corridor projects. Construction began in early 2020, and the project relied on more than $59 million in RTA funding.

Learn more about the project from the Arizona Department of Transportation.