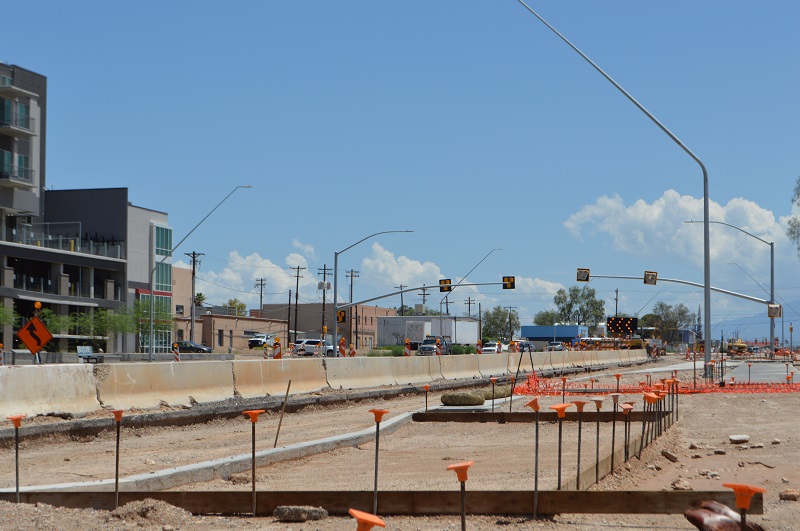 The road construction on East Broadway Boulevard between Euclid Avenue and Country Club Road will improve functionality and contribute to revitalizing the gateway between downtown and the historic Sunshine Mile with more multimodal amenities, better drainage and increased safety.

The roadway project was one of 35 regional corridor projects included in the 2006 voter-approved Regional Transportation Authority plan. Ashton Construction was awarded the contract for the work, which includes widening the road from four to six lanes. It will add and five-foot-wide bike lanes, a two-foot-wide buffer zone between vehicles and the bike lane, plus medians, sidewalks, signalized pedestrian crossings, bus pullouts and a large, underground drainage system with greatly improved capacity designed to meet current standards for roadway drainage.

Tucson Project Manager Kyle DeWitte provided an update on the status of the project. The city awarded the project to Ashton Construction.

What’s been done so far?

Significant underground work is largely complete, including excavation and backfill operations necessary to construct a large drainage system along the entirety of the project from Euclid to just east of Country Club Road.

The project marked another milestone recently when the contractor completed reconstruction and base layer paving of the intersection at Campbell Avenue and Broadway.

Crews will complete paving the driveway access points and continue landscaping and irrigation along the western half of the project. Curb installation and base paving will continue to completion along the east mile, from Campbell to Country Club, which will include the reconstruction and base layer paving of the intersection of Broadway and Tucson Boulevard. Completion of landscaping and irrigation work on the eastern mile of the project will follow.

What’s yet to come?

When the project nears completion, crews will apply the final asphalt layer, finish landscaping and irrigation, install final signage, and activate the traffic signals, including the pedestrian crossings. The public art will be installed, as well. It features a mid-century modern motif with geographic block wall elements by artist Dirk Arnold, which complement the historic mid-century architecture in the corridor.​

The summer’s construction work has been affected by the near-record rainfall with this year’s monsoon. Crews are working weekends to have the project on track for completion in spring 2022.