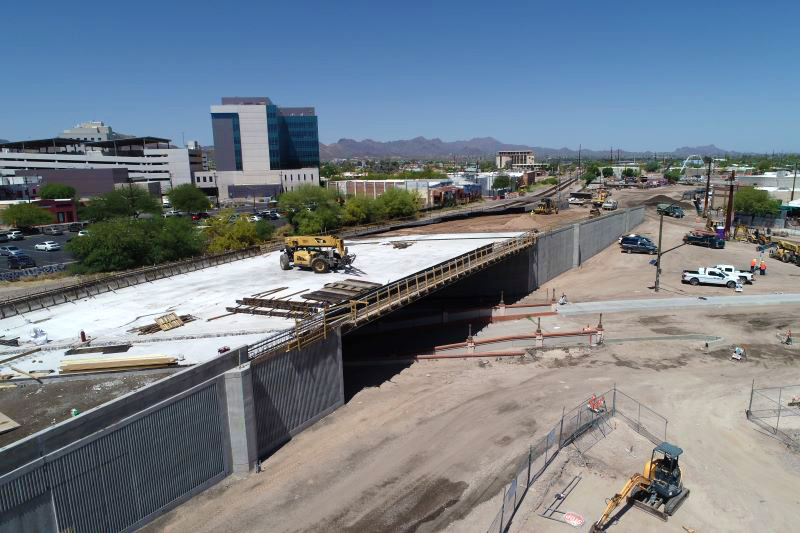 David Burbank is the Downtown Links project manager at the City of Tucson Department of Transportation and Mobility. He provided the following update, including news of a road that will be reopening and a new closure beginning later this month.

The deck of the Sixth Avenue overpass was finished in mid-April and crews are in the process of backfilling the abutments on both sides of the bridge. The Aviation portion of the work south of Broadway is completed. This involved moving curbs to realign the connection between Barraza-Aviation Parkway and Broadway Boulevard and adding crosswalks to the new intersection.

The major box culvert that runs underground to direct water away from neighborhoods and prevent flooding is now closed and continuous from Seventh Avenue and Sixth Street and to the Citizen’s Warehouse north of downtown.

Crews have completed the retaining walls south of Sixth Street and now are working on barriers that will border Barraza-Aviation Parkway north of Broadway and over the new Sixth Avenue overpass bridge.

Work is underway to excavate the area of Ninth Avenue and Sixth Street to prepare to build a new overpass.

Workers are also preparing the surface of Barraza-Aviation Parkway just north of Broadway for paving, though concrete delivery is delayed due to regional shortages caused by maintenance on a cement manufacturing facility in California. As a result, all construction companies are limited in how much they can purchase per week; Downtown Links is limited to 150 cubic yards per week.

On Friday, May 20, the intersection of Sixth Avenue and Seventh Street is scheduled to open.

Also coming this summer, the closure of Stone Avenue at Sixth Street. This will allow a new storm drain system to be added at the underpass, converting it from a pump-based system to a gravity-drain system.

“It’s going to vastly improve the drainage of the Stone Avenue underpass, so we should not see any ponding there anymore,” Burbank said.

When these closures happen on Sixth Street and Stone Avenue, traffic will be bypassing on the new Sixth Street alignment as it ties into Stone. The new configuration allows continuous traffic flow, other than when a pedestrian needs access. This closure is planned to last about three months.